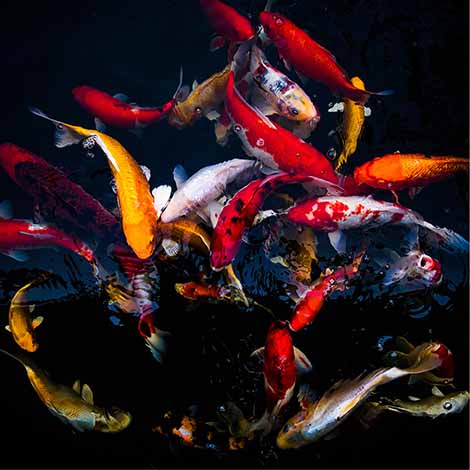 Identify the Fish in Your Water Garden

Did you know that koi varieties are named by their color patterns? All koi are unique, and each variety has its own distinct color combination, scale pattern and physical characteristics. Each koi variety also has many variations. Here are just a few:

Kohaku: These are the most well known variety of koi. Easily recognizable with a solid white body and large red markings (hi). Top quality Kohaku display a bright, blemish-free white combined with deep, vibrant red patterns that are evenly distributed along the body. Some common variations of Kohaku include;

Showa (Showa Sanshoku): These fish have a solid black body that's topped with red and white (shiroji) markings. The red, white and black should be evenly balanced, with crisp, clean edges between each color. Showa can easily be confused with Sanke so watch for black markings on the head and black that wraps around the body. Sanke will not display black markings on the head.

Ogon: These fish really stand out with their solid color, metallic scales, typically yellow (Yamabuki Ogon) or white (Platinum Ogon). A clean solid-color head and unblemished body are crucial to a high-quality Ogon. You'll find these koi with Doitsu and Gin Rin Variations.

Koi may be the living jewels of the pond world, but you can choose from a variety of fish that are suitable for your water garden - most of which can be found at your local pet store. Some of our favorites include:

Comets/Sarasa: Colorful and active, these varieties of goldfish are distinguished from their aquarium cousins by their long, single and deeply forked tail fin. In optimal conditions, their tails can grow up to 2 feet in length! Comets typically have red and white coloration with red appearing on the tail and dorsal fin. The Sarassa's color pattern, in fact, often resembles a kohaku's, making it quite koi-like. These guys have a life span of 7 to 14 years or more.

Shubunkin: Another variety of goldfish, shubunkins sport opalescent red, white, grey, black and blue scales in a calico pattern - and the bluer, the better (according to fanciers). They have streamlined bodies with well-developed and even fins. Shubunkins, which hail from Japan, reach a length of 9 to 18 inches and live 7 to 14 years or more. They add a big splash of color to your pond.

Why not put your fish to work for you! The plecos is an omnivorous fish that will actually eat your string algae (as well as leftover fish food and other scraps). In a pond, sucker fish can grow up to 2 feet long. Because he is a tropical fish, he will need to be overwintered inside when water temperatures dip below 60° Fahrenheit because he'll die in temperatures below 55°F.