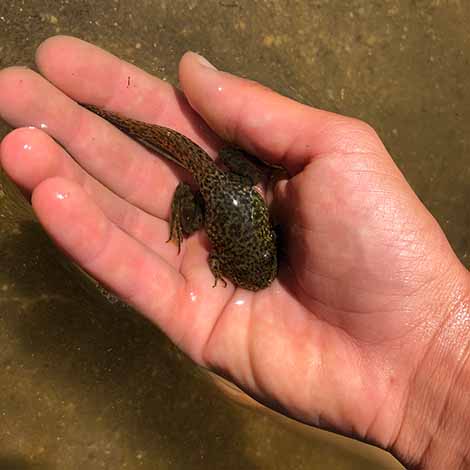 What would a summer evening on your pond or lake be without bullfrogs? Let's discuss how to distinguish bullfrog and toad tadpoles and understand how they develop into adults.

What Came First: The Egg or Frog

Both bullfrogs and toads reproduce by laying eggs in the water. Female bullfrogs deposit their eggs on the pond surface in large round clusters or masses protected by aquatic plants. One bullfrog can lay up to 20,000 eggs, which are then fertilized by the males. Toads create strands of dark-colored eggs that look like black pearls attached to foliage and leaves near the water's edge.

After 7 to 10 days, frog or toad tadpoles hatch from their eggs. Bullfrog tadpoles appear dark green to black in color and they're big - much larger than other species of frog or toad. They also mature more slowly when compared to their toad counterparts. In fact, bullfrogs will stay in their tadpole stage for almost three years before transforming into adults.

From Aquatic to Terrestrial

A toad's and frog's physical development from tadpole (or pollywog) to adult are similar. As tadpoles, they live exclusively in the water and nibble on aquatic plants for nourishment. At first, their bodies are long and narrow and include a tail where they store fat when food is in short supply during the winter months. But after about one year, the tadpoles will start to grow legs. Shortly thereafter, they grow arms. As their tails shorten, they develop lungs and their gills disappear. The tadpole, now several years old depending on where it's growing up, has finally transformed into a froglet that can make the leap from water to dry land.

When they're young, bullfrog tadpoles are herbivores that love to nibble on the string algae that forms along your rocks and under plants. Though they have been observed eating frog eggs (gasp!) and other newly hatched tadpoles, the algae should keep them more than satisfied - at least until they become adults. That's when they become carnivorous critters with a hankering for bugs, rodents, reptiles, birds, small fish and even an occasional bat.

When they're adults, bullfrogs are impressive creatures: As one of the largest frogs in the world, they grow to 8 inches long and weigh up to 1½ pounds. When they're tadpoles, they're impressive, too. The dark green swimmers measure up to 6 inches long, which is larger than most other frog species, and sport a dorsal fin that begins behind its arrowhead-shaped body.

As frogs are cold blooded, when winter approaches, they will begin to slow down as their body temperatures drop. When winter arrives, they will go into a state of dormancy and wait out the cold weather. The hibernation strategy varies between species of frogs. Toads tend to bury themselves in leaves or mud while frogs can pass the winter at the bottom of your pond below the ice. Frogs produce a type of glucose in their bodies that will allow them to freeze solid and still be able to survive. As the temperatures begin to rise in the spring their hearts will begin to beat again and they will begin to thaw. When they are once again mobile, they will actively search for a place to mate.

With the official start of spring you will soon be serenaded by the assembly of frogs and toads that set up camp at your pond and lake. These frogs and toads can get quite boisterous as they let out calls that can be heard from miles away. It is not the warm weather or a particularly good day that makes frogs and toads sing, however. When toads and frogs call out, they are actually trying to attract a mate. Both frogs and toads are capable of croaking, but calls vary between each species allowing their mates to distinguish who's who amongst the gathering of suitors. It is the male who calls out to potential female mates in an attempt to present itself as the best possible option as it is competing against a long line of bachelors. The size and wellness of each particular frog or toad, along with temperature can dictate the strength, pitch and carry of its call.

As with most critters in the wild, the strongest will survive - and tadpoles are no different. Out of the thousands of pollywogs that are born, only a small percentage make it to adulthood. They have, however, evolved some survival traits that protect them from predators, including their camouflage color that makes them excellent at hiding. You can help boost their survival numbers by adding pond dye or installing a decoy device like a Solar Owl Decoy or Nite Guard Solar, designed to chase away rodents and snakes. With its timed head rotation powered by a built-in solar panel, the Solar Owl Decoy will help repel nuisance birds and other small critters during the day. And the Nite Guard Solar LED lights that resemble a predator's glowing eyes will keep your pond - and your toads and frogs - safe at night.