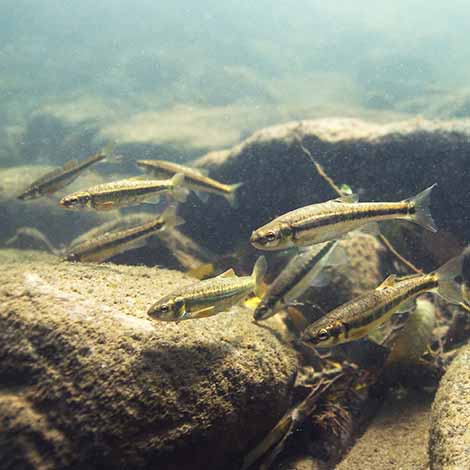 If you stock game fish in your pond or lake, you better know your baitfish. Used as food for larger predatory game fish, these small swimmers are typically common species that breed rapidly. They're easy to catch, easy to supply and easy to stock.

Freshwater baitfish include any fish of the minnow or carp family, sucker family, top minnow or killifish family, shad family, and some fish from the sculpin or sunfish family. Some common types that you'll see in a recreational lake include fathead minnows, golden shiners, creek chub and white suckers. Let's learn more about these specific types of fish and how to fatten them up for your bass and trout.

The fathead minnow (Pimephales promelas) is a species of temperate freshwater fish whose natural geographic range extends throughout North America. The golden, or xanthic strain known as the rosy-red minnow, is a very common feeder fish sold in the United States. In the wild, the fathead appears dull olive-gray with a dusky stripe extending down its back and side. These guys will eat just about anything, and they prefer a water temperature of 50 to 70 degrees Fahrenheit and a pH range of 7.0 to 7.5. Its main predator is the northern pike.

The golden shiner (Notemigonus crysoleucas) is a cyprinid native to eastern North America. In the wild, these bait fish grow to 3 to 5 inches long and have dark green to olive body with a silvery white belly. They prefer quiet, weedy waters and are fairly tolerant of pollution, turbidity and low oxygen levels. They can tolerate temperatures as high as 104 degrees F - which is unusually high for a North American minnow - and they nosh on zooplankton, insects, plants and algae. Predators include trout and bass.

The creek chub (Semotilus atromaculatus) is another type of minnow that's found in the eastern United States and Canada. Growing up to 6 inches, they typically have a dark brown body, sometimes with brown spots, with a white lateral line. These hardy bait fish, which prefer water temperatures between 35 and 90 degrees F, gravitate toward weedy areas and prefer stream or river environments rather than lakes. They'll gobble just about anything - including fish, insects, larvae and vegetation. Predators include trout and northern pike.

White suckerfish (Catostomus commersonii) are found in small streams, rivers and lakes in the Midwest and east coast of the United States. Reaching lengths between 12 and 20 inches, the white sucker has a dark green, gray, copper, brown or black-brown body with a light underbelly. They're bottom feeders, and they'll use their fleshy lips to suck up bottom sediment and other organisms that live there, including small invertebrates, algae and plant matter. Predators include walleye, trout, bass, northern pike and catfish.

When it comes to using bait fish, you have two options: stock your pond with them and keep a separate supply on hand to use when you do some fishing.

To stock your pond with bait fish, purchase a supply from your local sports shop or pet store and introduce them to your pond or lake after acclimating them. Be sure to provide a fish habitat for them, like one of the Honey Hole Attractor Logs, Shrubs or Trees, so they can safely reproduce (and fatten up!) and keep the population thriving.

In addition, grow bait fish in a separate tub or tank for use when you're fishing. Be sure to keep the water cool and fresh to reduce stress, and keep the oxygen levels high with a bubbler. They might be able to tolerate less-than-ideal conditions, but that doesn't mean they shouldn't be without their O2!