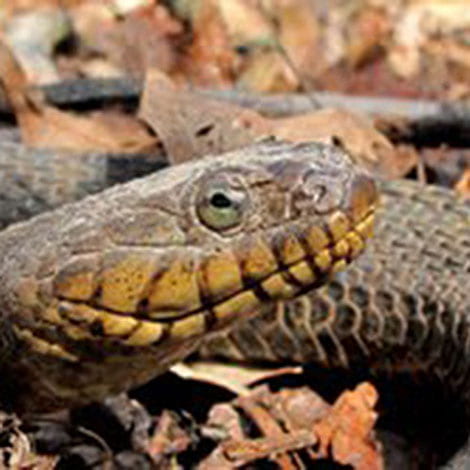 ASKED BY: Dylan of Garner, IA

We always have snakes around my pond, except in the winter. Where do they go?

A: Ponds and lakes get plenty of visitors – including different species of snakes that linger around water. Some of the more common varieties that call the northern states home include the Black Rat Snake, Corn Snake, Garter Snake and the Northern Water Snake.

Water snakes live wherever there's water, like near lakes, ponds, marshes, streams, rivers and canals. During the spring, summer and fall, when the weather is warm, you probably see these snakes slithering in and around your pond and in the grassy fields, looking for food and for places to sun themselves. But during the winter, they disappear. Where do they go? They're holed up and hibernating.

Summer Home, Winter Home
Snakes are ectothermic, which means they use the environment to regulate their body temperature. When it's warm, they're warm – and they ensure that by basking on rocks, stumps or brush in the full sunshine. In fair weather, rocks, aquatic plants, muskrat houses and beaver lodges are good places to find water snakes, which like to hide among the sticks and plant stems when they're not sunning themselves.

But when it's cold, they go on hiatus. These snakes are unable to generate their own internal body heat, so they rely on outside forces to keep their metabolisms churning. They need to overwinter in areas that will not freeze. The underground becomes their winter home, where they spend their time in temperature-stable burrows below the freezing line, and often share the space with other snakes.

Preferred Diet
In the spring, summer and fall, these slithering, mostly harmless critters are active day and night. During the day, water snakes hunt among plants at the water's edge, looking for small fish, frogs, worms, leeches, crayfish, salamanders, young turtles, and small birds and mammals. At night, they concentrate on minnows and other small fish sleeping in shallow water.

When the cold weather sets in; however, snakes go on a season-long diet. Their metabolism slows way down. Food supplies, like frogs and toads, dwindle. If snakes have undigested food in their bellies when they go into hibernation, they can die.

Friends and Foes
Water snakes have many predators, including birds, raccoons, opossums, foxes, snapping turtles, bullfrogs and other snakes. Humans who mistake the harmless snake varieties for dangerous ones, like Copperheads and Water Moccasins, can affect the population, too.

For the most part, these guys are our friends. They may eat some fish and frogs and hunt some of the indigenous wildlife, but they also do damage to the rodent population – which everyone can appreciate. If you see a snake on your property and you're not sure if it's a safe or dangerous variety, contact your local university extension office and describe the snake's size, color, scale pattern and where you found it. Never kill a snake without good reason, because they are important to our environment.