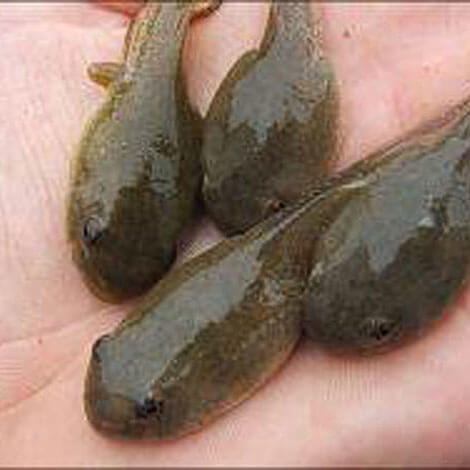 ASKED BY: Lynn of Beecher, IL

We had lots of tadpoles in our pond last year. Will they still be tadpoles this year or can we expect more frogs?


A: What would a summer evening on your pond or lake be without bullfrogs? Let's discuss how to distinguish bullfrog and toad tadpoles and understand how they develop into adults.

What Came First: the Egg or Frog
Both bullfrogs and toads reproduce by laying eggs in the water. Female bullfrogs deposit their eggs on the pond surface in large round clusters or masses protected by aquatic plants. One bullfrog can lay up to 20,000 eggs, which are then fertilized by the males. Toads create strands of dark-colored eggs that look like black pearls attached to foliage and leaves near the water's edge.

After 7 to 10 days, frog or toad tadpoles hatch from their eggs. Bullfrog tadpoles appear dark green to black in color and they're big – much larger than other species of frog or toad. They also mature more slowly when compared to their toad counterparts. In fact, bullfrogs will stay in their tadpole stage for almost three years before transforming into adults.

From Aquatic to Terrestrial
A toad's and frog's physical development from tadpole (or pollywog) to adult are similar. As tadpoles, they live exclusively in the water and nibble on aquatic plants for nourishment. At first, their bodies are long and narrow and include a tail where they store fat when food is in short supply during the winter months. Eventually, the tadpoles will start to grow back legs, followed by their front legs. And then their tails shorten and disappear, and they develop lungs. Before long they're full-fledged adults.

Survive and Thrive
As with most critters in the wild, the strongest will survive – and tadpoles are no different. Out of the thousands of pollywogs that are born, only a small percentage make it to adulthood. They have, however, evolved some survival traits that protect them from predators, including their camouflage color that makes them excellent at hiding.

You can help boost their survival numbers by adding pond dye or installing a decoy device, like an Owl Decoy or Nite Guard Solar, designed to chase away rodents and snakes. With its timed head rotation powered by a built-in solar panel, the Owl Decoy will help repel nuisance birds and other small critters during the day. And the Nite Guard Solar LED lights that resemble a predator's glowing eyes will keep your pond – and your toads and frogs – safe at night.