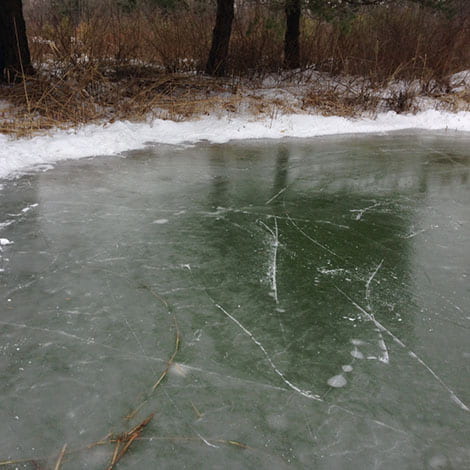 ASKED BY: Patrick of Vandalia, IL

How are algae able to grow in the winter when everything else is dormant?


A: Algae can be tough little buggers. An estimated 72,500 algal species exist worldwide, and some of them can thrive in inhospitable conditions, including areas with ice and snow. With a handful of nutrients and a little bit of light, they're able to grow – even in the 39 degree water under the ice in your lake.

But if your lake's water is clean and clear during the spring and summer, how can it explode with algae in the winter?

Food Aplenty
Algae feed on byproducts of decomposing organic debris, like phosphorous and nitrogen, in the water. During the warmer months, natural bacteria would typically break down these nutrients, leaving little food for the organisms. But in the cooler months, those bacteria go dormant. That means the algae enjoy a feast – and a population explosion.

If you keep a hole in your lake's ice, you can help control the nutrient density with a product like Airmax EcoBoost PRx. This bacteria enhancer, which has no temperature restrictions, binds suspended organics while providing trace minerals to fish. Simply mix it with water and pour it into the lake.

Let There Be Light
Algae also require sunlight to thrive – but not much. Even though a clear, solid sheet of ice, algae can get enough light to use for photosynthesis. When that light is impeded, however, the algae won't grow as quickly.

A layer of thick snow cover is Mother Nature's way of preventing light from penetrating the water, but you can also use pond dye, to block those rays. Pond dye is available as a liquid or in water-soluble packets that you can toss into your pond.

Algae's Benefits
Believe it or not, algae growth in the winter does have its benefits. It helps to filter the water, and on warmer days it's a great snack for your fish. Plus, when the algae photosynthesize, they give off oxygen as a byproduct – which is then available for your fish (and other aquatic critters) to breathe.

Don't worry: The algae won't take over your pond as it does in the summer. It can grow, but the cold temperatures aren't ideal for explosive outbreaks.