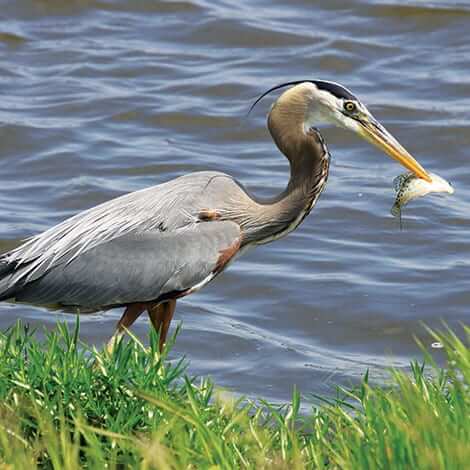 How to Deter Herons

The great blue heron is well known to many pond owners that stock their pond with fish. While they are easy to spot with their blue-gray plumage, black stripe over their eyes and a thick dagger like beak, they are not easy to keep away from your pond.

These protected birds can be seen throughout the year here in North America mostly soaring through the air with their 6-foot wingspan and 4-foot long body. Great blue herons can be seen together during the mating season that ranges from the beginning of September and October with a return in Mid-March through June, however when it is time to find food they fly solo.

A common hunting technique is to soar through the air looking for a quick bite to eat, usually in wetlands or ponds and lakes. They prefer to sit motionless along shorelines or in shallow waters and wait patiently for a snack to swim by. Another technique is to walk slowly flushing out any potential prey that may be hiding with their feet.

The great blue heron is an intelligent bird so you will need to get creative when it comes to encouraging them to hunt in a different location. Here are some tricks to try:

As you can see there are many tactics you can use to your advantage in protecting your fish from herons. We recommend using a variety of methods to discourage them from landing on your property because eventually, they will figure out they won't be harmed.