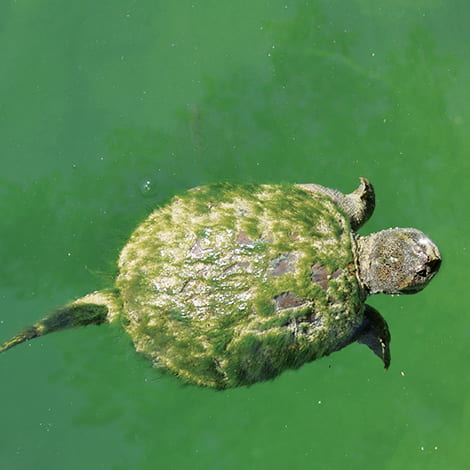 Snapping Turtle in the Sun

Ponds tend to attract all types of creatures to your backyard, some more desirable than others. Snapping turtles (Chelydra serpentina) are large freshwater turtles that make their homes in ponds and streams with plenty of room and food. When encountered in the water, they typically slip quietly away from any disturbance – but because they can have fierce dispositions, it is a good idea to get to know these shelled reptiles and their habits a little better.

Snapping turtles have a look all their own. Resembling a prehistoric dinosaur, snapping turtles have a large, muscular build with a rigid carapace (hard shell) that can grow up to 18 inches. They usually weigh 10 to 35 pounds. A snapper's most defining feature, however, is it's long, flexible neck and beak-like mouth used to grab prey and defend itself from predators.

This omnivore's preferred meals include just about anything it can capture and swallow, including aquatic plants, invertebrates, fish, frogs, reptiles, birds and small mammals. Snapping turtles also clean-up your pond by consuming carrion (or dead animals). In a farm or swimming pond, a snapping turtle might snap up some undesirable visitors, like snakes.

A snapping turtle is mostly active at night, but it does venture out during the day to scavenge and hunt for food. When C. serpentine is on dry land, it can be aggressive, particularly when it feels threatened – and this is when you should avoid contact at all costs. A snap from a snapping turtle can be painful!

If a snapping turtle is causing problems in your pond, your best bet is to safely and humanely remove it. Grabbing its shell with your hands is a bad idea; it can easily stretch its neck back across its own shell to its hind feet and snap your fingers, and it can scratch you with its sharp claws.

Instead, trap it in a turtle trap, like a Tomahawk Live Trap. The 32-by-18-by-9-inch trap made with 12-gauge wire comes pre-assembled and ready to use. Simply place it in the water partially submerged and bait with fish or meat. When you capture the snapper, relocate it to a place that has a water body, food and shelter.