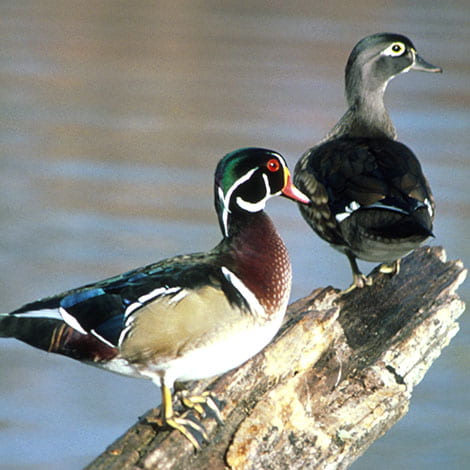 ASKED BY: Robert of Galesville, WI

How can I tell if the duck that visits our pond is a wood duck?

A: As some of the most stunningly colorful visitors to pond, wood ducks – scientific name Aix sponsa – are easy to spot as long as you know what to look for. Get out your binoculars, because here's a quick primer on wood duck field markings and behavior.

Unmistakable Appearance
Both male and female adult wood ducks measure about 19 inches high and have a wingspan of 26 to 29 inches. Unique among the duck species, wood ducks have a boxy, crested head, a thin neck and a long, broad tail. When airborne, their silhouette shows a skinny neck, long body, thick tail and short wings.

During mating season, which runs from autumn to early summer, male wood ducks sport colorful, ornate plumage. Some of their telltale markings – which are designed to attract females – include:

After mating season, male wood ducks lose their bold colors, but they retain their bright red eyes and bill.

Females lack the showy plumage of male wood ducks. Rather than colorful feathers, they don subtle yet intricate grayish-brown feathers on their bodies, with their sides a lighter shade than their backs, and a white ring around each eye. Their heads have a crest of feathers at the back and white feathers on their throat and chin.

Water-Centered Behavior
Wood ducks pair up in the late winter and breed in the spring. If you listen carefully, you can hear their calls: Males attract females with a squeaky whistle of "jweep," and the females answer with a different, louder "oo-eek" whistle.

After they breed, wood ducks build a home – preferably in a tree that's near a wooded swamp, pond, lake or marsh with cattails stands, or along a river or stream. They fashion their nests in cavities in nearby trees that are either natural or abandoned by a woodpecker. If they're unable to find suitable trees, wood ducks will readily use nest boxes built by people. (Check out how to build one here.)

Lined with feathers from the female, a wood duck's nest can house anywhere from six eggs to more than 40 eggs. Why the wide range? If a female cannot find a nest of her own, then she will lay her eggs inside another wood duck's nest.

After a few weeks, the ducklings – which are already covered in a full down coat – hatch from their shells and venture into the world. Rather than being raised in the nest, however, the tiny ducks get their feet wet by literally jumping out of the nest cavity and waddling their way to the water. Talk about sink or swim!

Grubs and Greens
As ducklings and juveniles, wood ducks eat a lot of protein, preferring bugs, worms and, occasionally, a small fish. As they get older, their diet grows to include more plant-based grub. They'll seek out wild fruit, seeds, nuts and aquatic plants, along with flies, beetles, caterpillars, isopods and snails.

Wood ducks are particularly drawn to open-water areas with dense, vegetative cover for hiding and foraging. They also prefer clean, clear water when diving for fish, aquatic bugs and greens. You can optimize their food sources by using muck-busting and water-clarifying solutions like MuckAway and EcoBoost PRx.

The bacteria and enzymes in MuckAway eat through the accumulated muck and debris at the bottom of your pond, and EcoBoost is a natural bacteria enhancer that will bind organics suspended in the water. When used together, you'll see a cleaner, clearer water column – perfect for any wood duck!