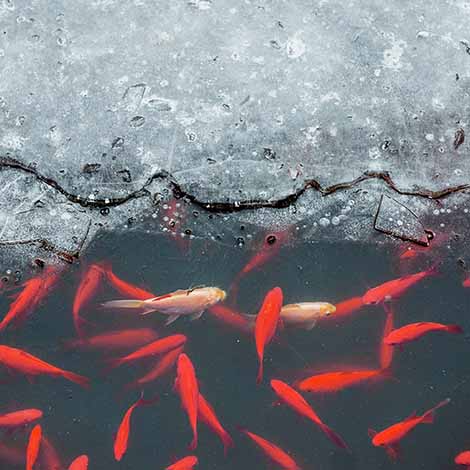 Overwintering Koi and Goldfish in Your Pond

During the winter months when the water temperatures are 45 to 50 degrees Fahrenheit and below, hardy koi and goldfish will go into their annual torpor, or dormancy. The fish's metabolism and activity slows, they become very lethargic, and they require little nourishment. If you don't have the means to keep them indoors or simply prefer to let them stay in the natural environment you can keep them in your pond throughout the winter with a little bit of thought and preparation. Follow these tips below to be sure you keep them as safe as possible.

Should Your Fish Stay or Go

The first rule of thumb when deciding to overwinter fish in your pond is to check the depth. Your water garden should have a depth of at least 18″ to overwinter hardy fish. This is very important as water can easily freeze 18″ to 24″ deep depending on weather conditions. If your pond is not quite deep enough to beat out the ice then an indoor home for the winter is the better bet.

Also consider the type of fish in your pond. Just as with plants, some fish species can be "hardy" in some climates and not in others. An Oranda, for instance, might do just fine overwintering in a pond in Orlando, Fla., but up in Fargo, N.D., that same fish would turn into a popsicle--even with an aeration system and de-icer. Fish like Plecostomus, Oranda, Telescope goldfish and Black Moors need to be moved indoors for the winter months when water temperatures start dropping into the 60's.

If these situations apply to your pond check out our article for overwintering your fish indoors.

Prep Before the ice forms

So you've decided to winter your fish over in your pond, following these steps will help ensure your fish get that life-sustaining oxygen they will need.